Home / News / Games Can Make You a Better Strategist 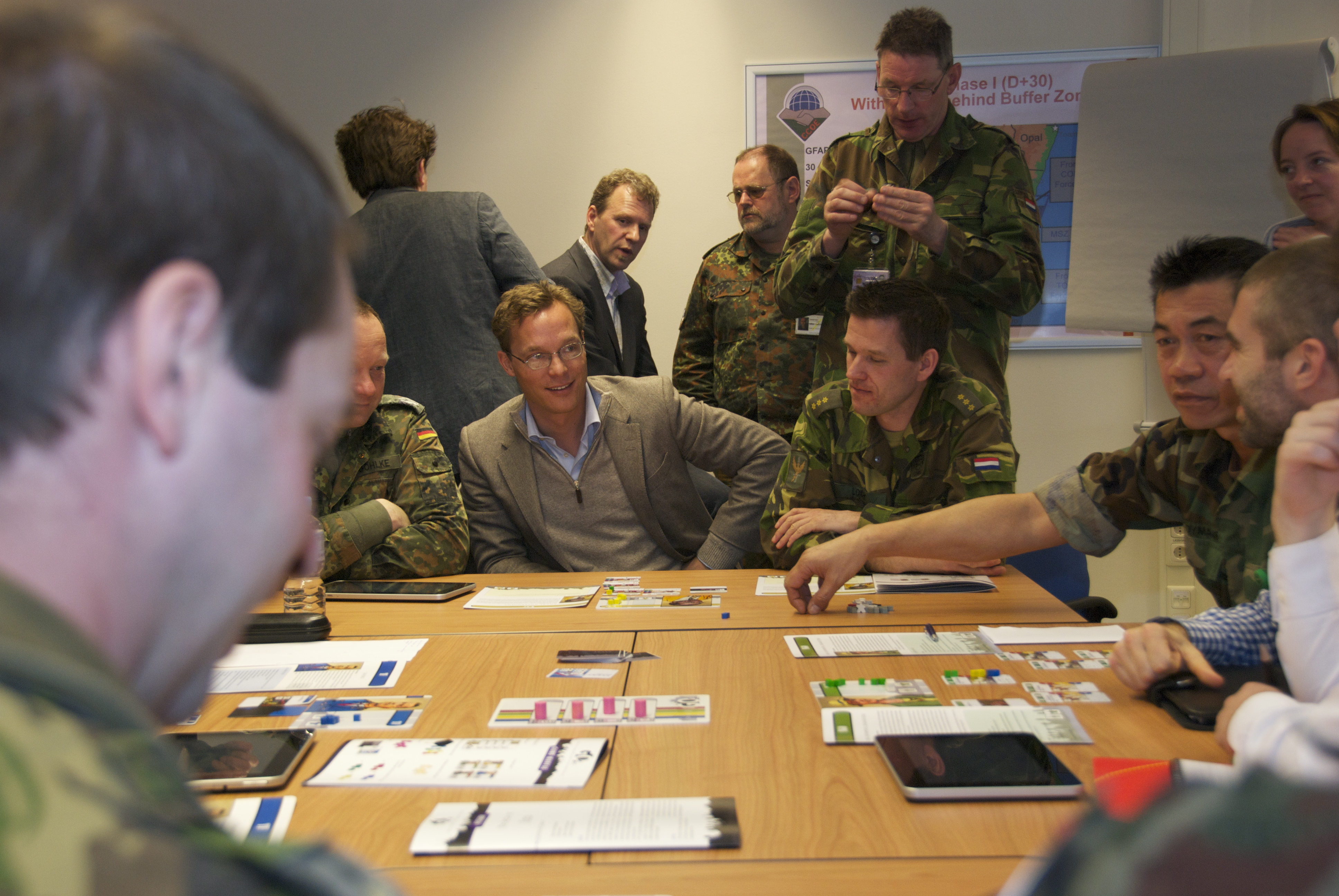 Games Can Make You a Better Strategist

Very interesting article in Harvard Business Review. “If HBR has published this, then the fields of gamification, serious games, and simulations must be legitimate….really! Find the article here.

Games Can Make You a Better Strategist

Play has long infused the language of business: we talk of players, moves, end games, play books and so on. And now we hear often about the “gamification” of work—using elements of competition, feedback and point scoring to better engage employees and even track performance. Even so, actual games are still taboo in most organizations—the stereotype of the work-avoiding employee cracking new high scores in Minesweeper has given gaming a bad name. And the corporate executive playing games to improve his or her strategy-making skills is still rare. This is unfortunate. We think that games have an important place in cultivating good strategists, and that now more than ever games can give executives an edge over their competition.

First, there has never been a greater need for companies to learn new ways of doing things in response to a complex and dynamic business environment. And second, the sophistication and effectiveness of strategy games at our disposal has risen tremendously. In the past two decades, strategy games have evolved from dull monochrome dialogs to well-designed AI-based apps.

We think that the next generation strategy apps will finally be able to prove a real business case. Just consider some the advantages games have over more traditional approaches in strategy education. Books are great to foster intellectual understanding but are not interactive and do not reflect the reality of busy schedules and declining attention spans. Live pilots are highly realistic but costly, time consuming and risky. And coaching or mentoring approaches have great merits for personal development, but are hard to scale.

Games on the other hand can create an experiential, interactive and tailored understanding of strategy at low cost and in a scalable manner. They allow managers to suspend normal rules in an acceptable way and they provide an effective audiovisual medium for absorbing ideas.

In our work with executives and strategy games, we see five distinct benefits of using games for enhancing strategy formulation and execution skills:

1. Games provide inexpensive, real-time feedback. With instant feedback, explicitly expressed in scores or implicitly via a competitor’s behavior, executives can learn much more quickly than in the real world.

In addition, unlike in reality, failing in games, even a bingo money game, has no costly downside. Games are testing grounds for strategies. They’re “sandboxes” where erroneous behaviors can be undone and different decision paths tried out. Execute a flawed strategy in the real world and your organization might falter; applying it in the gaming realm, and a lesson is learned at the cost of only a little frustration.

Well-produced strategy games can model environments tailored to a company’s circumstances and targeted skills. Based on the user’s actions, a game can quickly adapt to the learner’s individual skill level and learning curve — clear advantages vis-à-vis books, articles, or seminars. A smart game keeps the manager in what psychologist Mihaly Csikszentmihalyi calls the “flow” zone, an optimal corridor between challenge and skill, by building a series of rounds of increasing difficulty. The learning curve of a game can thus be tailored to the individual player, without overwhelming them as reality often does.

People Express, for example, is a business simulator that provides players with a rich inside perspective on starting and managing an airline. In each simulated time period, the player makes strategic decisions and receives feedback from past decisions—on how fast to grow, how to set prices, or how aggressively to advertise. Hiring policies influence morale, productivity and turnover, marketing efforts shape demand growth, and competitors fight back. Strategists learn to manage and steer complex systems—without the costly risk of bankruptcy. “Deep actionable knowledge and decision-making skills develop when people have the chance to apply classroom theory in the real world, with its messy complexity, time pressures, and irreversible consequences,” notes John Sterman, a professor at MIT who uses this game to educate business students and executives (we spoke with him recently about how games enhance strategy).

Playing with and/or against others helps train a range of game-theoretic skills: wisely choosing one’s actions based on anticipated competitive reactions over a multiple-period time horizon. From cooperation to competition, a game with multiplayer features taps into the rich culture of board games humans have been playing for centuries.

As an example, a large utility company created a number of different teams role playing competitors and regulators. Each team’s task was both to decide on pricing, investment, M&A and integration priorities and to experiment with new business models while anticipating and reacting to the actions of competitors and regulators. The game play included collaborative interactions like agreeing on M&A/JV efforts. Exogenous shocks (new technologies, economic-political events) were incorporated as well to train players to stay agile and flexible. This interactive element helped the company not only to lay out strategic responses to possible contingencies, but also to get into the competitor’s or regulator’s shoes and see the world from their perspective.

3. Games allow structured analysis of an executive’s behavior. By unveiling what-ifs and routes-not-taken, well-developed games help managers reflect on their actions (and omissions). This way, even implicit choices and intermediate steps in executing a strategy become apparent and this helps in understanding the causalities that led to victory or defeat. A replay function can help retrace a player’s actions or view the game play from a competitor’s perspective. And score-keeping allows performance comparison with others.

The Your Strategy Needs A Strategy game was created by BCG and Neofonie, a Berlin-based mobile computing company, to allow users to develop a hands on appreciation of the importance of choosing the right approach to strategy and execution in each business environment. It was released at the same time as a book with the same name. It features short rounds of game play in different environments and provides a running commentary on how the player is performing. A leader board allows comparison across players and identifies “best-in-class” strategists. Post action replay allows players to understand the consequences of their action (see the screenshot below). And contextualized links to relevant content allows players to deepen their understanding of what happened and why.

The Your Strategy Needs A Strategy game was created by BCG and Neofonie, a Berlin-based mobile computing company, to allow users to develop a hands on appreciation of the importance of choosing the right approach to strategy and execution in each business environment. It was released at the same time as a book with the same name. It features short rounds of game play in different environments and provides a running commentary on how the player is performing. A leader board allows comparison across players and identifies “best-in-class” strategists. Post action replay allows players to understand the consequences of their action (see the screenshot below). And contextualized links to relevant content allows players to deepen their understanding of what happened and why.

This process of analysis and reflection can give answers to such questions as: Was the choice of strategy incorrect, or execution flawed? To improve outcomes, does the player need to work on better observation, deeper consideration of options, greater agility, more flexibility and so on.

4. Games allow different scenarios to be tested. Strategy games can “enhance” reality by simulating different scenarios that require particular strategic responses. For example, exogenous shocks that haven’t (yet) occurred in real-life, but could plausibly materialize, can easily be modeled. How would a pharmaceutical company react, for example, when a new innovation disrupts the industry’s cost structure? Or what are the consequences of a conspicuous privacy scandal for a social networking company?

Strategy games anticipate and amplify reality by acting like vaccinations. By reacting to subcritical doses of a harmful diseases, a host develops immunity by “learning” to react for the worst case—a full scale infection.

Reid Hoffman, the founder of LinkedIn, plays The Settlers of Catan, an old-school board game, and says that tech entrepreneurs are drawn to the game because it “most closely approximates entrepreneurial strategy”. It requires players to collaborate and exchange resources to amass points, while the random rolls of the dice change the environment and require players to constantly adjust their strategies.

5. Games can be rolled out easily to many managers. Whereas conferences, seminars and coaching practically limit the number of participants, digital games display almost unlimited scalability.

Many strategy games and simulations we use today have their origin in the military sphere. The defense sector uses strategy games and simulations to train hundreds of thousands of their troops. Scalability is critical. Games only need to be programmed once, but can be rolled out to a large target audience at minimal incremental cost. Adjustments in scenarios can often be implemented comparatively easily and cheaply, by retuning a few parameters or by creating a new visual “skin” for the game.

Martin Reeves is Director of the Boston Consulting Group Bruce Henderson Institute and a senior partner based in New York City. He is the lead author of the new book Your Strategy Needs a Strategy (HBR Press, 2015).

Georg Wittenburg was the main architect of the companion iPad game, Your Strategy Needs a Strategy, and is now CEO and co-founder of Insightfully, an automated analytics start-up based in Berlin.